Accessibility links
'The Other Boleyn Girl' Sisters Anne (Natalie Portman) and Mary Boleyn (Scarlett Johansson) compete for the love of Henry VIII. For all the intrigue, Justin Chadwick's film is essentially a well-upholstered soap opera.

'The Other Boleyn Girl'

'The Other Boleyn Girl' 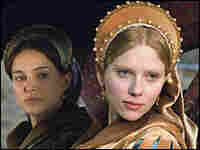 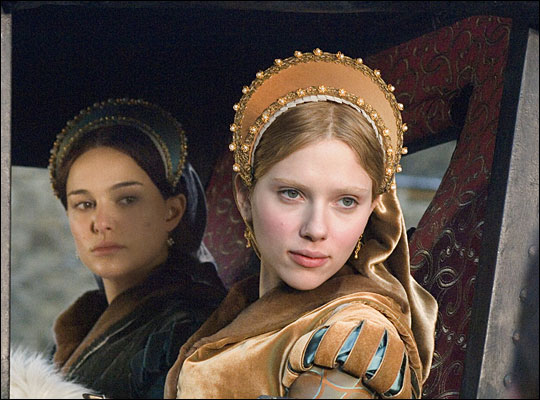 Anne (Natalie Portman, left) and Mary Boleyn (Scarlett Johansson) are sisters competing for the affection of King Henry VIII in The Other Boleyn Girl.

What is it lately, with all the regal costume epics filling their thrones with overgrown teenagers?

I mean, Sofia Coppola had thirtysomethings Louis XVI and Marie Antoinette flouncing around like high-schoolers on their way to the guillotine, and the Golden Age-d Elizabeth played by Cate Blanchett would've been well into her 50s — which makes all those elaborate hissy fits over Walter Raleigh look silly.

Now, in The Other Boleyn Girl, we learn where Liz picked up the predilection for tantrums: from mom Anne Boleyn, who's depicted here as the proto-sorority tease from hell. Dad Henry VIII, played by Eric Bana, would've been in his early 40s when they wed, and so is consequently a bit long of tooth himself to be mooning about like a 16-year-old.

But then no movie that casts Natalie Portman and Scarlett Johansson as sisters (Johansson plays sweet, dull Mary Boleyn, who also bedded Henry) is likely to be accused of reaching for realism. There's a smidgen of bodice-ripping, much urgent rushing down hallways, and acres of brocade and velvet on display — none of which makes Justin Chadwick's well-upholstered soap opera remotely interesting.

'The Other Boleyn Girl': Official Site