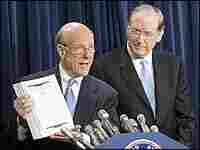 The Senate Intelligence Committee takes sharp aim at the CIA, citing numerous examples of faulty intelligence as the Bush administration and Congress made the decision to go to war in Iraq.

A main conclusion of the 500-page report is that the CIA overstated the threat of Iraqi weapons of mass destruction and ignored evidence to the contrary.

The report's release Friday has led to questions over whether lawmakers would have voted to support war in Iraq with more complete data. NPR's Debbie Elliott talks with Sen. Evan Bayh, a Democrat serving on the Intelligence Committee, and Michigan Rep. Peter Hoekstra, a Republican on the House Intelligence Committee.