Accessibility links
'Semi-Pro' The owner, coach and star player of a '70s pro basketball team struggles to keep the team from going under. Insipid comedy doesn't measure up to earlier Will Ferrell films. 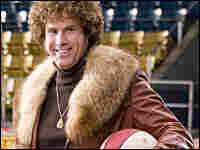 Gotta hand it to Will Ferrell, the man is game: Ask him to dress like an elf, or don tights and ice skates, or hop into a NASCAR racer, and he'll cheerfully play anchorman, as it were, for some pretty slight stuff.

But those films all had scripts with actual jokes. This lamely staged basketball sitcom, on the other hand, tries to make do with a not-terribly-amusing "sit" — an owner-coach for a failing '70s ABA team tries to promote it into the NBA — and almost no "com" at all.