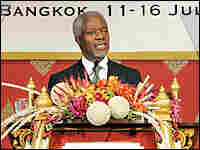 U.N. Secretary-General Kofi Annan says that if a unified approach to combating the spread of AIDS isn't developed, the disease will drain economic and other resources. Reuters hide caption

Annan, speaking as the 15th International AIDS conference began in Bangkok, said that if the world's nations do not unite to combat the spread of AIDS, it will become a drain on economic and social resources. Hear NPR's Craig Windham.