Ravel's Romantic Theme Inspired by Rhythms of a Factory

Bolero is perhaps most famous as the love theme for Dudley Moore and Bo Derek in the 1979 movie 10. But Maurice Ravel didn't strictly have romance in mind when he composed the classic piece a half-century earlier, music commentator Miles Hoffman says. 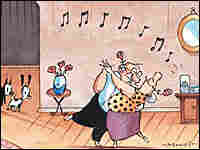 Bolero started out as a ballet score commissioned by dancer Ida Rubenstein. Her troupe danced the composition's first performance at the Paris Opera in 1928. It was an instant hit.

Ravel, whose roots were in the Basque country on the French-Spanish border, originally called the piece Fandango. As romantic as it may seem, Ravel said the pulsing, rhythmic composition was inspired by one of the factories he had visited with his father, who was an engineer.

"Over the years, the piece has been arranged by just about everybody," Hoffman tells NPR's Renee Montagne, as they sample a variety of versions of Bolero from a new compilation CD.

Music Heard in this Report

All selections are from Ravel's Greatest Hit: The Ultimate Bolero (BMG Classics)

5. Benny Goodman and His Orchestra