Accessibility links
Mississippi Choctaws Find Economic Success In rural Mississippi, once one of the country's most economically depressed areas, a Native-American tribe has proven a powerful catalyst for growth. NPR's Debbie Elliott reports.

Children chase waves at the Geyser Falls Water Theme Park, part of the Pearl River Resort the Choctaws have built as a destination for families. hide caption

Choctaw Chief Phillip Martin, 78, is now one of the most influential persons in Neshoba County. hide caption 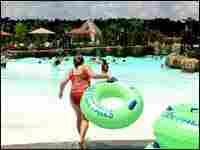 In rural Neshoba County, Miss., once one of the country's most economically depressed areas, a Native-American tribe has proven to be a powerful catalyst for growth. As NPR's Debbie Elliott reports, the Mississippi Band of Choctaw Indians have created an industrial and recreational empire in the region that's brought prosperity to themselves and their neighbors.

In the 1960s, most members of the Choctaw band lived under miserable economic and health conditions. Nearly all houses on the reservation were considered substandard: 90 percent had no indoor plumbing; one-third had no electricity.

The Choctaws owe much of their economic success to Chief Phillip Martin, who was elected head of the Tribal Council in 1979. Martin worked hard to turn conditions around, investing in the infrastructure necessary to draw industrial jobs to the reservation. In the 1990s, the Choctaw band opened its first casino, which soon became a tourist destination. Its latest project is a resort aimed at attracting families. Today, the tribe is Mississippi's second-largest employer.