Accessibility links
Freda Payne Returns to Her Jazz Roots R&B legend Freda Payne's hit song "Band of Gold" made her famous more than a generation ago. Now she's back singing jazz in a tribute performance to Ella Fitzgerald. She talks with NPR's Tony Cox about her career, her influences, and the next chapter of her musical life.

R&B legend Freda Payne's hit song "Band of Gold" made her famous more than a generation ago. Now she's back singing jazz in a tribute performance to Ella Fitzgerald. She talks with NPR's Tony Cox about her career, her influences, and the next chapter of her musical life. 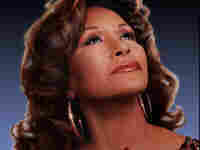 Freda Payne has gone from singing jazz to disco and back. Alan Mercer hide caption

She had the Motown sound before Motown was Motown.

COX: R&B singer Freda Payne has the hearts and minds of a generation, with hits like "Band of Gold" and "Bring the Boys Home." Now she's back with her signature sound. With a run at Feinstein's at Loews Regency in New York City, she'll be giving classic standards a new twist, performing hits made famous by jazz legend Ella Fitzgerald.

But before Freda hit it big, she was a late-blooming child. She talked about her beginnings with me here at NPR West and said that until the age of 12, there was one teensy thing that was keeping her from her destiny in the spotlight.

Ms. PAYNE: I didn't even know I could - I didn't even know I had a talent, and it was my piano teacher, at the age of 12, who brought it out, who discovered that I had a voice, and it was merely by accident. You know, every year we'd have a piano recital, and in preparation for the forthcoming recital, Mrs. Johnston(ph) said Freda, I want to hear your voice. I want to test you, audition you to be in a group, to be in an ensemble of six people to sing a song at the recital.

I said okay, so she started playing and started having me test my voice, and she said Freda, you have a lovely voice. You know what? I want you to do a solo. And then after that - you know, at the recital, my mother always - my mother invited all her friends, you know, and afterwards, they just came flocking around, saying oh we didn't know you could sing like that.

And then I started to enter talent contests. That's what did it. That gave me more confidence. My confidence began to build because I started winning.

(Soundbite of song, "After the Lights Go Down Low)

Ms. PAYNE: (Singing) After the lights go down low. Baby, you…

COX: You admit that you have been known as an R&B singer and a pop singer but never really known as a jazz singer, although that's been a well-kept secret all these years. Your first album, however, was in fact a jazz album, "After the Lights Go Down Low."

(Soundbite of song, "After the Lights Go Down Low")

Ms. PAYNE: (Singing) And I'll be needing you so, after the lights go down low.

COX: So now you have this new show, a little tribute to Ella Fitzgerald. My question is why didn't you sing more jazz earlier in your career?

Ms. PAYNE: I was perceived as an R&B, pop artist. So as a consequence, being with a booking agency, the bookings that I got were more like, you know, bookings where people expected me to be more commercial. I was literally kind of living a lie because I actually sing jazz. I'm actually better at singing jazz than I am singing R&B.

Ms. PAYNE: (Singing) What good is melody, what good is music, if it ain't possessing something sweet?

COX: So what is it about Ella that drew you to want to do this sort of tribute performance?

Ms. PAYNE: She has been the number-one person that I have admired since I was 12. When I first discovered that I could sing, I started listening to singers, and she was the one that I was most impressed with.

Ms. PAYNE: (Singing) Well, it don't mean a thing if it ain't got that swing.

COX: I heard Patti LaBelle say, very recently as a matter of fact, that she was singing "Over The Rainbow," and before she sang it, she said I am so tire of singing this song, but she knew she had to because the audience demanded it.

Ms. PAYNE: They wanted it.

COX: Do you ever feel that way, you're just so tired of singing, but you know you have to because that song is so closely associated with who you are?

Ms. PAYNE: Well "Band of Gold" would be it, but by the time I get to the end of the show, and I'm coming back for that last encore…

Ms. PAYNE: (Singing) Now that you're gone, all that's left is a band of gold…

Ms. PAYNE: A lot of times, I will do "Band of Gold," and as a matter of fact, I - and I find that it's a good thing because I see people in the audience just light up, like (unintelligible)…

Ms. PAYNE: (Singing) And the memories of what love could be if you were here with me…

Ms. PAYNE: And then it's like, it kind of makes it more of a treat.

Ms. PAYNE: (Singing) You took me from the shelter of a mother I had never known…

COX: I read that - about you having, as we all do, ups and downs in life. In 1977, I read that your mother died, which was a painful period for you.

COX: But the very next year, you gave birth to a son.

Ms. PAYNE: I was pregnant when my mother died.

COX: And my question is how does or how do the ups and downs of real life affect your singing?

Ms. PAYNE: Oh wow. It doesn't affect the voice. It affects the emotions. It just made me more aware of where my life was going and what I had to do and my responsibilities. Being pregnant didn't bother me, other than the fact that when it got to a certain point, I had to stop working, you know?

Ms. PAYNE: But as far as my mother's death was concerned, that did affect -that affected me a lot because it was heart-wrenching. I had to go - my mother died from breast cancer, and you know, that - I was taking her to the hospital, to the doctors' appointments, and just seeing her disappointment every time she came out the door, and it wasn't like - you were, like, looking for, like, maybe they've got some good news, maybe you know, something changed.

It was something I never hope I ever have to go through again.

Ms. PAYNE: (Singing) She is a lonely woman. No one to cry to at all.

COX: Here's my final question. Are you excited, because this is a return to Feinstein's for you.

Ms. PAYNE: Yeah, well the first time I was there, I don't know if I mentioned it, but I was there with Darlene Love, and Darlene and I did an act together where we - they called it Love and Payne. This time it's just Freda, Freda doing Ella.

COX: Freda Payne kicks off her run at Feinstein's tonight. She'll be there performing timeless hits from Ella Fitzgerald until Saturday, March 1. That's our show for today. Thanks for sharing your time with us.