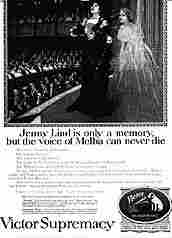 Edison was completely against creating stars. He saw the expense, the inconvenience, and he didn’t get along with the Carusos of this world. He was a rough and ready westerner and he rubbed the the wrong way. As a businessman he said "Let’s not even put the name of the performer on the recording. Let the listener decide. But on the other hand, Victor went with the Star and it sold."

The sounds in the story range from the first ever recorded words to diamond discs cut in 1927. Some of these archival artifacts are worn by time and play. But listen and you will hear some of the oldest sound recordings that exist anywhere.