Singer-songwriter Joseph "Amp" Fiddler's debut CD, Waltz of a Ghetto Fly, is a fusion of classic Detroit soul and modern electronic funk. Day to Day producer Christopher Johnson talks with Fiddler about his evolution from supporting musician to bandleader -- and captures a live performance with Fiddler and his band in NPR West's Studio B. 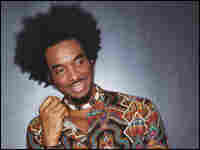 With roots in Trinidad and St. Thomas, Fiddler studied music at Oakland and Wayne State universities in the Detroit area, and under the tutelage of jazz great Harold McKinney, best known for his 1970s work with the Tribe collective.

Fiddler, who is still based in Detroit, tells musical stories about everyday life, people, relationships and the world around him. The CD's songs and production value sound more mature and groomed for a debut album -- but Fiddler has been a sideman in other bands for years, honing his skills.

"Now I'm doing my own thing and its a beautiful world," Fiddler says. "I think I draw from everyone Ive worked with, but Im still trying to develop my own sense of being up there in the front."

Fiddler says the CD and its title track celebrate the simple things that mean so much. "When I was kid, I used to see older guys walking down the street with a stride. They were waltzing a certain way -- neighborhood style, to get respect."