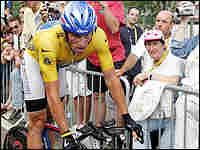 Lance Armstrong on his way to a six-straight win in the Tour de France. Reuters hide caption