Listen
The Case of the Horrifying Mystery Writer

Dust jacket for 'The Man with the Wooden Spectacles.' Courtesy of The Harry Stephen Keeler Society hide caption 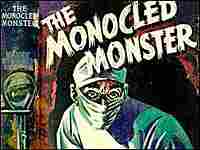 Keeler, who lived most of his life in Chicago, was the man behind such titles as The Skull of the Waltzing Clown, The Barking Clock and The Mystery of the Fiddling Cracksman. Among the characters populating his work: political boss Criocan Mulqueeny, Chinese xylophonist Ichabod Tsung and the infamous Sophie Kratzenschneiderwümpel.

But Keeler's convoluted plots were the ultimate expression of his skill. He was known to grab a random selection of newspaper clippings from his extensive collection and begin weaving the stories together, often with ludicrous connections.

To make things even worse, Keeler's narrative is filled with blind alleys and digressions. And the author frequently introduces essential characters in the final pages of his books -- one even reveals the killer in the last sentence.

Among the classic Keeler plots:

X. Jones of Scotland Yard: A man is found strangled to death in the middle of a lawn, yet there are no footprints other than his own. Police suspect the "Flying Strangler-Baby," a killer midget who disguises himself as a baby and stalks victims by helicopter.

The Case of the Crazy Corpse: The police dredge a coffin out of Lake Michigan. Inside is a nude body, the top half of a Chinese woman, the bottom half of a black man. The two halves are joined with a green gum.

As with many pop cult figures, Keeler is now considered so bad, he's good. Some of his biggest fans are writers and editors who revel in the way he breaks all the rules.

First-edition Keelers, long out of print, have sold for up to $300. Independent publisher Ramble House has recently started to offer several Keeler titles in paperback.