Authorities say they face tough odds in trying to stop the spread of the northern snakehead, a sharp-toothed, destructive fish from Asia that's turned up in the Potomac River — apparently dumped there. Officials say the aggressive, invasive species will wound ecosystems and hurt the local fishing economy. NPR's John Nielsen reports. 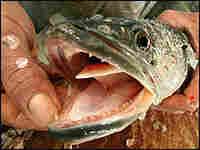 The aggressive snakehead fish has become a threat in parts of the United States, where it is pushing local fish out of their habitat. Corbis hide caption

The aggressive snakehead fish -- which has a voracious appetite and can live out of water for days -- has become a threat in parts of the United States. Corbis hide caption