Accessibility links
Democrats Face Off in Crucial Debate for Clinton Hillary Clinton has lost 11 contests in a row, and even her husband has said the New York senator's candidacy could be over if she loses in Texas and Ohio. That makes Tuesday night's debate between Clinton and Barack Obama more important than ever.

Listen
Democrats Face Off in Crucial Debate for Clinton 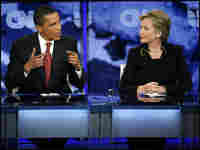 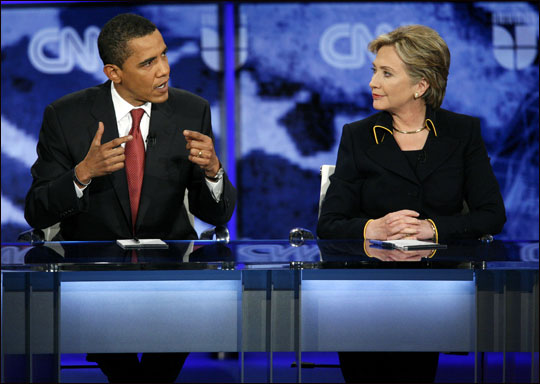 Democratic presidential hopeful Hillary Clinton has lost 11 nominating contests in a row, and even her husband has said the New York senator's candidacy could be over if she loses in Texas and Ohio next week. That makes Tuesday night's debate between Clinton and her rival, Illinois Sen. Barack Obama, more important than ever.

NPR's national political correspondent, Mara Liasson, talks to Robert Siegel about what to expect from the debate in Cleveland. A transcript follows:

Siegel: In tonight's debate, it's hard for me to ask you what Sen. Clinton needs to do because she seems to have tried to do everything already. What do you expect to happen tonight?

Liasson: Well, I think it would be fair to expect that she will continue some of the many lines of attack that she's tried out against Sen. Obama on the campaign trail in recent days. She's said he's not ready to be commander in chief; that he's naive in his foreign policy; he's hypocritical in his campaign tactics.

But in the last debate, we expected some of those too, and she came off as very collegial, very reflective at the end. Some people thought it was almost a concession when she said: No matter what happens, I'll be fine. But I think one of the most important things she's tried to communicate to the voters and to her own supporters this week is that she is not giving up, she's still fighting, and I do expect we will see some of that fight tonight.

Let's say that she does very well in the debate and goes on to win in Ohio next week, or for that matter, in Ohio and Texas. Does she conceivably retake the lead?

It would be very hard for her to retake the lead in delegates, even if she wins Ohio and Texas. Let's look at the numbers. Because the Democrats give out their delegates on a proportional basis, if she won Ohio, for instance, 52 to 48, she'd only get five more delegates than Obama. If she won by 60-40, which would be an incredibly big --

So the point is that to get back in the lead, to become a true front-runner again in terms of delegates, she'd have to win very, very big. Her own campaign has said flatly, they have predicted that after March 4, they will be within 25 delegates of Obama.

And as of now, before the primaries in Texas and Ohio, the gap in delegates is about what?

Is a little bit less than 100 delegates, including superdelegates. He has 1,300-and-something and she has 1,200-and-something, depending on who's counting.

Now another wrinkle: Ohio is a straight primary, but Texas is a combination primary and caucus.

That's right. If you have voted in the primary, you are allowed to come back at night and participate in the caucus. Some of their delegates are given out through the caucuses; the rest of them are given out in the primaries. The other thing about Texas — very similar to states like Iowa — the delegates are awarded on state Senate districts, and the number of delegates that each of these districts get is based on the turnout of Democrats in the last general election.

And then the dimension of the caucus, if history is any guide here, would benefit Sen. Obama as well.

And she has complained bitterly about the caucus system being basically slanted against her kind of voters, who can't take two hours off from work.

That's right. In the old days, you had to go into the spin room after the debate to get this onslaught of opinion. But now it just kind of comes into your computer. And the minute Obama says something that the Clinton camp feels is not correct, they'll send you within seconds a list of fact-checks, and if she says something that they think is particularly wonderful, they'll immediately send out a headline that says "video moment of the debate" and they'll have a link to YouTube.

This transcript has been edited for clarity.