Accessibility links
Maine Tribe Offers Home for Natural Gas Depot The impoverished Passamaquoddy tribe of eastern Maine is offering up a quarter of its pristine coastal reservation for a $300 million liquefied natural gas facility. Opponents worry about the depot's effect on the local cultural and environment. 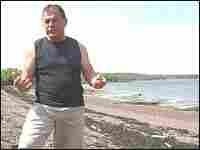 The drive to bring more natural gas into U.S. markets has touched off fights in coastal communities. Now, the impoverished Passamaquoddy tribe of eastern Maine is offering up a quarter of its tiny reservation, on a pristine part of the coast, for a $300 million liquefied natural gas facility.

The Pleasant Point reservation is picturesque but poor: As many as half of the tribe's 1,600 members are unemployed. Tribal leaders believe a depot for liquefied natural gas, or LNG, will improve those numbers. But some Passamaquoddies -- and their neighbors -- worry that this high-tech vision might erode traditional culture and the local environment. Fred Bever reports.