Accessibility links
Saving the Spotted Owl More than a decade ago the Northern spotted owl was listed as threatened and millions of acres of forest were shut down to logging in the Pacific Northwest. NPR's Elizabeth Arnold reports on the recovery of timber towns -- and a bird that still faces extinction.

The Northern spotted owl population has declined by 50 percent over the last 10 years, despite its protected status. Joshua Smith hide caption 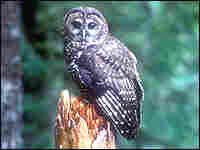 It's been more than a decade since a little-known, dark-eyed owl was listed as threatened and millions of acres of forest were shut down to logging in the Pacific Northwest. Today, the Northern spotted owl has became synonymous with lost livelihoods, and for many in the timber industry, it represents all that's wrong with the Endangered Species Act. As part of a series marking the 30th anniversary of the ESA, NPR's Elizabeth Arnold reports on the slow recovery of timber towns -- and an owl that still faces extinction.

In the heart of the Olympic Peninsula, the town of Forks, Wash., used to boast it was the logging capital of the world. Now, men who once made their living in the woods are prison guards, and the jagged edges of clear cuts once visible from the town have long since greened over. The listing of the spotted owl led to the eventual shutdown of 2.4 million acres of forest in Washington alone, and 30,000 forest jobs were lost.

The transition away from timber was hard in Forks, with many people losing their jobs, homes and timber-related businesses. But the townspeople say they've survived. And while they still resent the government for placing the needs of the owl over the needs of families, some say the community is stronger because it no longer relies on a single industry.

The Northern spotted owl has become one of the most intensely studied species in the world. Ten years of research and more than 1,000 published studies detail the threats to its survival, but there's still no sure way to stop its decline.

With the listing of the spotted owl came a recovery effort that radically reduced timber harvests in the Pacific Northwest and protected large portions of the owl's old-growth habitat. Yet owl numbers continue to dwindle, and the threats it faces aren't all manmade.

The barred owl is pushing the spotted owl out of its habitat, and biologists worry that sudden oak disease could wipe out the owl's preferred tree, the tanoak. West Nile virus is also increasingly a threat. As Arnold reports, the continued decline of the owl has some questioning the policy of protecting habitat, but others say the goal of preserving land has always been larger than saving one species.