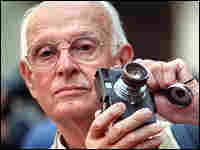 Henri Cartier-Bresson, one of the great photographers of the 20th century, has died at the age of 95. The publicity-averse photographer was buried on Wednesday in a private family ceremony at Monjustin, in southeast France.

Regarded as a pioneer of photojournalism, Cartier-Bresson co-founded the photo agency Magnum in 1947. He began taking pictures in the 1930s and continued until his abrupt retirement in 1975, when he started pursuing a career in drawing.

Dubbed "the eye of the century," Cartier-Bresson is known for capturing historic events such as the death of Mahatma Gandhi and the liberation of Paris, in addition to moments of everyday life, such as his iconic image of a smiling young boy carrying bottles of wine.

NPR's Neda Ulaby has a remembrance.