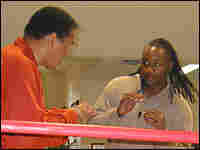 The center is designed to honor unity, sportsmanship and excellence -- qualities both Lewis and Ali, both Olypic medalists, exemplified in their careers.

Lennox Lewis, born five years after Ali won his gold medal, went on to be the first Briton to win the world heavyweight championship in a century. Lewis became famous for his high-profile defeats of such champions as Evander Holyfield and Mike Tyson.