The revered singer-songwriter from Austin, Texas, was born to Mexican immigrants; his first punk band, the Nuns, opened the last show of the Sex Pistols. The True Believers, his next band, was a sort of Tex-Mex guitar army; he followed that up with a 15-plus-year solo career of chamber rock. 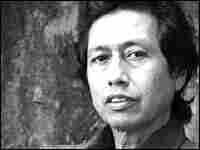 Alejandro Escovedo on the Web