Silva says he can't write anywhere except in his private den. He's chosen colors for it that remind him of the Mediterranean, the setting for most of his thrillers. Jeff Rogers, NPR hide caption 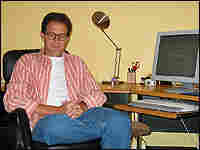 Whether it's poetry or prose, writers often have precise rituals for putting their thoughts on paper.

Toni Morrison says she works best in the still hours before sunrise, writing in longhand with a pencil and yellow pad. Gertrude Stein sometimes scribbled her poems on odd scraps of paper, while sitting in the driver's seat of her parked car. And as legend goes, Charles Dickens always kept objects on his writing desk in exactly the same position. He touched certain items three times each day for luck.

For spy novelist Daniel Silva, workspace and routine are as essential as oxygen. Silva has been a fixture on The New York Times bestseller list for the past eight years, with titles like The English Assassin and A Death in Vienna.

Silva's novels are carefully researched, and usually set in exotic locales. But they begin in a decidedly mundane setting. Silva has claimed the lower level of his family's Washington, D.C., home as his private writing den. For Creative Spaces, an All Things Considered series that explores the studios, offices, hideaways and hamlets of artists, Silva invited NPR's Michele Norris into his den to explain his approach to writing.