Accessibility links
T. Rex 'Lived Fast and Died Young' Besides being among the biggest meat-eaters ever to roam the planet, Tyrannosaurus rex may have been one of the fastest growing, according to a new study. NPR's Christopher Joyce reports. 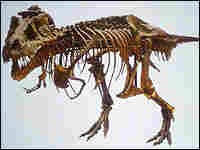 One of the mysteries of dinosaur evolution is how animals that started out at about three feet long grew over millions of years to become the planet's most fearsome monsters. As NPR's Christopher Joyce reports, a new study on the Tyrannosaurus rex offers some clues. It appears that in addition to being among the biggest meat-eaters ever to roam the planet, T. rex may have also been one of the fastest growing.

By studying fossilized bones from several specimens, researchers concluded that the king of dinosaurs gained five pounds a day during a four-year growth spurt in its teen years, between the ages of 14 and 18. That's a faster growth spurt than other, closely related dinosaurs studied.

The Life of T. Rex

• Roamed the Earth 65 million years ago

• Among carnivores, second only in size to the Giganotosaurus

The scientists based their conclusions on growth rings in the ribs and other small bones from museum specimens of T. rex, such as Sue at Chicago's Field Museum.

The work, led by researchers at Florida State University, the American Museum of Natural History and the Field Museum, appears in the current issue of Nature.