Guitarist Bob Weir, a founding member of the Grateful Dead, has released a 2-CD career retrospective, Weir Here: The Best of Bob Weir. 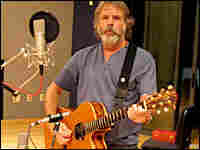 One disc features all studio cuts, the second contains selected concert performances by Weir with the Grateful Dead plus an unreleased live track -- Bob Dylan's "Masters of War" -- recorded by Weir's own band, Ratdog.

NPR's Scott Simon recently talked with Weir about the double album and his long career, touching on the guitarist's close relationship with Jerry Garcia, his Grateful Dead bandmate who died in 1995.

Weir says he still feels Garcia's presence -- in the studio, on stage and in his more private, creative moments. "I think when somebody lives in your head and in your heart for a long time, you carry them around when their body's gone."

Weir performed three songs during his visit to NPR's Studio 4A: "Cassidy," which he wrote with longtime Grateful Dead lyricist John Perry Barlow, "KC Moan," a pre-blues era traditional, and "Ashes and Glass."

Weir's Group Ratdog on the Web
Weir Bio on Dead.net