Accessibility links
Creative Spaces: Phylicia Rashad's Nature Escape Tony-winner Phylicia Rashad returns to Broadway this fall in August Wilson's Gem of the Ocean. She tells NPR's Michele Norris she likes to surround herself with nature while preparing for her roles. 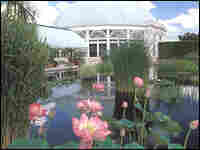 For three decades, actress Phylicia Rashad has taken on roles that exude warmth, wit and wisdom. She's perhaps best known as Claire Huxtable from TV's Cosby Show. More recently, her portrayal of the stony matriarch in A Raisin in the Sun earned her a Tony award. She's now preparing to return to Broadway this fall in the August Wilson drama, Gem of the Ocean.

Gem of the Ocean is the latest in Wilson's 10-part cycle about African-American life in the 20th century. Rashad plays Aunt Ester, the first female lead in Wilson's series. Ester, who's said to be 285 years old, is a powerful spiritual guide who helps former slaves find true freedom.

Playing Ester on stage is a physically and emotionally demanding role. To prepare for the challenge, Rashad turns to her primary source of inspiration -- the great outdoors.

For Creative Spaces, an All Things Considered series that explores the studios, offices, hideaways and hamlets of artists, NPR's Michele Norris met Rashad in the New York Botanical Garden in the Bronx. Rashad spoke about the sanctuary of nature and how it helps her develop the characters she plays. "When you can sit in a place like this, and allow yourself to be," Rashad says, "the mind can become quiet."