Accessibility links
D&D Turns 30 This year marks the 30th anniversary of the creation of the fantasy board game Dungeons and Dragons. Learn how the enduring popularity of the game has inspired a new generation of video game designers, and meet some modern fans of the game.

Fantasy Board Game Inspired a Generation of Game Designers 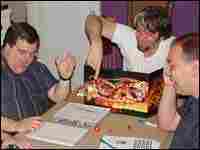 Tools of the trade: Miniature figures represent the physical arrangment of players and their enemies at the battle begins. Dungeons and Dragons requires 4-, 8-, 12- and 20-sided dice -- each of the so-called “Platonic solids” of classical geometry. Kimberly West hide caption

D and D in the Bronx

This Thursday night in Indianapolis, fans of role-playing and war games will gather for the annual GenCon convention. And this year, they’ll be marking the 30th anniversary of the most popular game in the genre’s history -- Dungeons and Dragons, known by its fans by the shorthand "D and D."

In the modern era of virtual reality, NPR's Rick Karr reports that the original, unplugged version of the game remains popular and has proved a key influence on the next generation of video games.

Anyone who thinks that Dungeons and Dragons has been consigned to the scrapheap of 1980s relics, right next to Pac-Man and leg warmers, would be surprised by what happens every Thursday night in Peter Girvan’s apartment in the Bronx.

For the past two years, Girvan and four friends -- all professionals in their 30s -- have been getting together every Thursday to play D and D -- sitting around a table with inch-high plastic figures, rolling odd dice and saying things in the odd, imagined voices of their characters.

The voices are part of the fun. Players often adopt the personalities of their characters -- in Girvan’s case, an acerbic warrior cleric from the Eastern realms of this particular fantasy world, called the Dark Hills.

The world these players journey through and the opponents they encounter are the responsibility of another player called the "dungeon master." With a roll of the dice, players find out how well their characters fare in battle. For D and D fans, it doesn't get any better than this.

Dungeons and Dragons co-creator Dave Arneson says he and partner Gary Gygax had pretty low expectations when they published the rules in 1974. "War games and smaller general games at the time were pretty small-audience. I mean, you had a successful game if you sold a thousand copies of it," he tells Karr.

But three decades later, players have purchased tens of millions of rule books, odd-shaped dice and fantasy character figurines. The game is also credited with inspiring a whole generation of game designers, just as the computer revolution took root.