Accessibility links
Elmer Bernstein: Man with a Golden Ear Film composer Elmer Bernstein, who died recently at 82, was perhaps best known for his rousing score to The Magnificent Seven. But he had 200 films and 14 Oscar nominations to his credit. Hear Weekend Edition film music commentator Andy Trudeau and NPR's Liane Hansen. 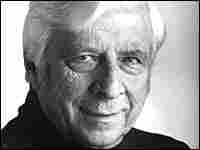 Film composer Elmer Bernstein might be best known for his rousing score to The Magnificent Seven. But that classic Western theme was only one example of Bernstein's remarkable dexterity, on display in 200 films and 80 television shows.

Bernstein was nominated 14 times for Oscars -- most recently in 2002 for Far from Heaven. He won only once, for the 1967 musical Thoroughly Modern Millie. He came of age as a composer in the late 1950s, part of a generation of artists who made a lasting mark on Hollywood. And his death earlier this week followed closely on the heels of two of his contemporaries, Jerry Goldsmith and David Raksin.

Andy Trudeau, who comments on film music for Weekend Edition Sunday, tells NPR's Liane Hansen that Bernstein was one of several composers who gave jazz a prominent role in film music. One vivid example is the score for 1955's The Man with the Golden Arm.

Theme to 'The Bridge at Remagen'

Overture from 'The Ten Commandments'

"Clark Street: The Top" from 'The Man With the Golden Arm'

"Forced March" from 'The Scalphunters'

He studied piano under the great composer Aaron Copland, and the rhythms of some of Bernstein's music -- including The Magnificent Seven -- reminds Trudeau of Copland's own work.

Yet Bernstein didn't have to be robust to be great. For To Kill a Mockingbird, he gave the music a child's perspective, creating a moving score out of themes of innocence and simplicity.

And few were in Bernstein's class when it came to comedy scores. Animal House, Meatballs and Airplane! are on his list, as are The Blues Brothers and Ghostbusters.

Far from Heaven was a 1950s-style melodrama that required an old-school score, Trudeau notes, and provided a fitting capstone for Bernstein's career after a few less memorable efforts in his later years.

Elmer Bernstein on the Web