Accessibility links
The Middle East and the West: The U.S. Role Grows As World War II ends, the United States becomes the great outside power in the Middle East, with three main concerns: Persian Gulf oil; support and protection of the new nation of Israel; and containment of the Soviet Union. NPR's Mike Shuster continues his six-part series on the history of Western involvement in the region.

Listen
The Middle East and the West: The U.S. Role Grows 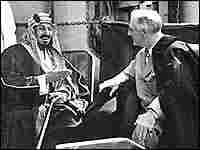 As World War II ended, the United States became the great outside power in the Middle East, with three main concerns: Persian Gulf oil; support and protection of the new nation of Israel; and containment of the Soviet Union. The goals proved difficult to manage, especially through the rise of Arab nationalism, two major Arab-Israeli wars and an Arab oil embargo.

NPR's Mike Shuster continues his six-part series on the turbulent history of Western involvement in the Middle East with the story of America's rising role in the region.

Oil has always been the U.S.'s first priority in the Middle East. President Franklin Roosevelt discussed oil when he met with the Saudi king, Abdul Aziz ibn Saud, just before the close of World War II.

Another cornerstone of U.S. policy in the region has been Washington's support for Israel. The United States was among the first nations to recognize Israel in 1948, even as the United Nations voted to partition Palestine into Jewish and Arab states.

Washington's intervention in Iran -- a U.S. and British-backed coup ousted Prime Minister Mohammad Mossadegh in 1953 -- also added to mistrust of the United States in the Arab world.

"Iran was the first place where the United States acted as [a colonial power], overthrowing in this case a constitutional government, a popular government, a government that had a huge parliamentary majority," says historian Rashid Khalidi, author of Resurrecting Empire.

As nationalism began to sweep through the region, symbolized by the rise of Gamal Abdel Nasser in Egypt, the United States felt threatened by a movement it saw as aligned with the Soviet Union and communism.

By the mid-1960s, the United States had failed to form close relationships with Arab nations beyond Saudi Arabia. The Six-Day War between Israel and the Arab states only toughened Washington's position. The 1967 war left Israel in control of Jerusalem, the West Bank and other Arab territories, much of which it still occupies today.

The distrust between Washington and the Arabs hardened by the time President Nixon took office. "In the Nixon period [Secretary of State Henry] Kissinger and Nixon see the Middle East largely in terms of the U.S.-Soviet relationship. And that was probably the high point of the Cold War rivalry as seen in the Middle East," says William Quandt, a historian of U.S. policy in the Middle East since World War II.

By the end of the 1970s, there was not much good will toward the United States in the Arab world, according to Zachary Lockman, a professor of Middle East history at New York University.

America was seen as "being on the side of the forces of the status quo, the forces of conservativism, the forces opposing Arab unity and opposing the kinds of social change, social reform, even social revolution that many Arabs felt was necessary," Lockman says.

NPR Special Series: The Middle East and the West, A Troubled History
Bios of Key Figures in the Series
Thomas W. Lippman: History of U.S.-Saudi Ties Jan. 17, 2004
The Mideast: A Century of Conflict