Accessibility links
Famed Hollywood Hotel Soon to Learn its Fate The Ambassador Hotel once hosted Hollywood stars, dignitaries and presidents. Soon, its tenants will be schoolchildren. But the L.A. school district must first decide whether to raze the hotel or renovate it. Gloria Hillard reports. 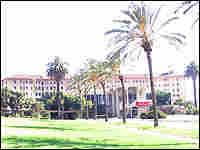 Once a hotspot for Hollywood's elite, these days the Ambassador only hosts film crews. Gloria Hillard hide caption

In its heyday, the Ambassador Hotel hosted Hollywood stars, dignitaries and presidents. Six Academy Awards were held in its Coconut Grove nightclub. And Richard Nixon, as a vice presidential candidate, is said to have finished his famous Checkers speech there.

But what may have been the beginning of the end for the hotel came in 1968, when Robert F. Kennedy was assassinated while walking through the hotel's pantry. He had just celebrated a victory in California's Democratic primary.

The Ambassador finally closed its doors in 1989. Since then, the hotel and its 24-acres of prime real estate have been in limbo. But its fate may be decided in the next few weeks. The Los Angeles Unified School District, which owns the property, will decide what parts of the main buildings will be preserved -- if any.

Some, including Hollywood's current celebrities, object to a demolition of the historic site. Others say the structure is too massive to be restored as a school, and should be torn down. Gloria Hillard reports.