Accessibility links
Dinah Washington: A Queen in Turmoil Before her death at 39 in 1963, singer Dinah Washington battled her seven husbands, her weight and even her fans. But when she sang, nothing else mattered. Biographer Nadine Cohodas talks about Washington's life and music.

Singer Dinah Washington, the Grammy-winning "Queen of the Jukeboxes," left her turbulent life behind at the tender age of 39. In that short period, a volatile mix of undeniable talent and deep-rooted insecurity took her to the heights of fame and the depths of self-doubt. 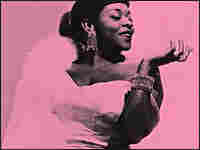 That was in 1963. Now, as fans mark what would have been Washington's 80th birthday, music historian Nadine Cohodas fills NPR's Liane Hansen in on some of the story. Cohodas has written Queen: The Life and Music of Dinah Washington.

Born in Tuscaloosa, Ala., in 1924, the former Ruth Lee Jones moved with her family to Chicago as a young girl. She considered the Windy City her true home. And it was there in the early 1940s that a local nightclub owner provided her first gig -- and a new name that she would make famous. By 1959 she had earned a Grammy for her version of the song "What a Diff'rence a Day Makes."

In his 2001 biography Q, music legend Quincy Jones vividly describes Washington's style, saying she "could take the melody in her hand, hold it like an egg, crack it open, fry it, let it sizzle, reconstruct it, put the egg back in the box and back in the refrigerator and you would've still understood every single syllable."

But the singer's musical gifts were offset by a wild and extravagant personal life. Married seven times, Washington battled weight problems and raced through her profits buying shoes, furs and cars in an effort to lift her spirits.

Washington also tried numerous prescription medications, primarily for dieting and insomnia. A mix of the pills she was taking in 1963 caused her death, which was ruled an accident. Her gift lives on through her rich musical legacy.