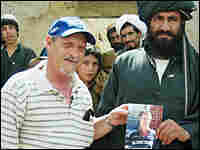 Last week, the U.S. military called to order its first tribunal proceedings since the end of World War II. Four suspected Al Qaeda fighters were formally charged at the U.S. naval base in Guantanamo Bay, Cuba, where some of them have been detained for more than two years.

Among the four suspects is 29-year-old David Hicks, an Australian who was captured by the Northern Alliance in Afghanistan in 2001. A convert to Islam, Hicks had gone to Pakistan to study the religion and ended up in Afghanistan, where he joined the Taliban. At the tribunal, Hicks pleaded not guilty to charges of attempted murder, conspiring to commit war crimes and aiding the enemy. His trial is set to start in January.

Terry Hicks, David's father, traveled to Cuba for the tribunal and had an emotional reunion with his son, whom he had not seen in five years. When Hicks was first transferred from Afghanistan to Guantanamo, his father decided to retrace David's steps through Pakistan and Afghanistan to try to find out what had happened along the way. A camera crew accompanied him and produced The President Versus David Hicks, a documentary that examines Hicks' tangled journey.

Terry Hicks speaks with NPR's Jennifer Ludden about the trip and what it taught him about his son. "He always tried to help out where he could," says Hicks, "in his own way, that was probably what he was doing."