Accessibility links
U.S.-Cuban 'Bridge' Music Finally Released The 1999 recordings of a group of American and Cuban musicians took years to be released, despite involving Bonnie Raitt, Mick Fleetwood and others. Bridge to Havana has finally cleared all hurdles.

CD cover for 'Bridge to Havana.' A documentary film of the sessions is being released on DVD. hide caption

In 1999, during a relative thaw in U.S.-Cuban relations, a group of American musicians traveled to Havana as part of an independent cultural exchange program called Music Bridges Around the World. 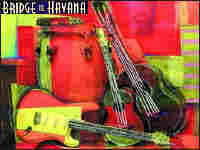 Bonnie Raitt, Mick Fleetwood, Gladys Knight and others met up with a group of contemporary Cuban musicians at Havana's Hotel Nacional for a collaborative recording session. It was the largest U.S.-Cuban musical project in more than 30 years.

But U.S. trade restrictions and legal tangles kept the session tapes off the market for five years. NPR's Phillip Davis reports on the long-awaited release of Bridge to Havana on CD and DVD.

Despite the politics, the language barriers and the time pressures -- the project was scheduled to last one week -- the musicians wrote, arranged and recorded more than 35 original songs.

At the end of the sessions, the artists performed a marathon concert at Havana's Karl Marx Theater.

Cinematographer Haskell Wexler caputured the event for a documentary, also titled Bridge to Havana, which is being released along with the CD.