Listen
Nanotech in Fashion: The Trend in New Fabrics

This cotton shirt has been processed with spill-resistant technology by Nano-Tex, a leading nanotechnology company. Eddie Bauer hide caption 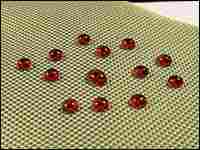 Consumers have more choices in the type of fabrics they wear than ever before. In addition to natural fibers like cotton, silk and wool, there are now a wide variety of synthetics on the shelves.

Fans say high-tech microfibers offer better performance and more design options than their natural counterparts, and are nothing like the scratchy leisure suits of the past (think John Travolta in Saturday Night Fever). A new wave of nanotechnology allows clothes to resist spills and wrinkles, and wear longer between washings. As part of an NPR series on fashion, Leda Hartman takes a look at latest trends in textile technology.

"[French design firm] Girbaud is the company that brought me over to the other side, in that I had been a strictly silk, cotton, linen, wool, cashmere sort of person," Parks says. "I thought that was the finest that you could do, and it's just not true."

Girbaud, for instance, makes a wool and spandex skirt with an uneven hem, laser cutwork and random, permanent pleats.

Ingrid Johnson, a professor of textile development and marketing at the Fashion Institute of Technology, says today's synthetic fibers are smaller and softer than the polyester of yesteryear.

Traditional labels like Ralph Lauren and Calvin Klein tend to stick to traditional fabrics such as linen and cotton. But designers targeting younger people, like Nautica and Tommy Hilfiger know their customers won't be so discerning, Johnson says. "The new generation, my children's generation, do not think anything about polyester," she says. "They have no negative connotation when they hear it."

Nanotechnology is offering a new way of processing fabric that could revolutionize the clothing industry. Nano-Tex, a leading company in the field, has developed processes that make traditional cotton and silk fabrics resistant to spills that would normally ruin clothing.

Material treated with nanotechnology can be engineered to do almost anything -- repel liquids, resist wrinkles, dry fast and breathe. Instead of using topical treatments, which eventually wear off, the chemicals in nanotechnology actually form a molecular bond with the fabric.

F.I.T.'s Johnson says this is just the beginning. Someday treatments will trap odors and then release them in the wash, make your skin feel cool -- or even moisturize your feet.