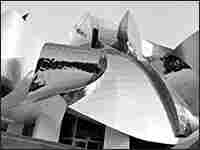 Former L.A. County District Attorney Gil Garcetti is known for his high-profile prosecutions of O.J. Simpson and the Menendez brothers.

But he left the district attorney's office in 2000 and got out his cameras, turning a lifelong hobby -- photography -- into a second career. He talks with NPR's Scott Simon about his images of the ironworkers who built the Walt Disney Concert Hall in Los Angeles, designed by architect Frank Gehry.

The National Building Museum in Washington, D.C., is hosting "Symphony in Steel: Ironworkers and the Walt Disney Concert Hall," an exhibition of 100 Garcetti images.

In the summer of 2001, Garcetti drove past the Disney Hall construction site and was taken by the ironworkers' acrobatics high above L.A.'s North Grand Boulevard. He returned to the site throughout the summer and fall of 2001 to photograph the workers as the structure slowly came together.

After the Hall was completed in February 2003, Garcetti followed up his ironworker series with panoramic photos of the Hall's distinctive stainless steel exterior.

Two books of Garcetti's black-and-white Disney Hall images have been published this year: Iron: Erecting the Disney Concert Hall and Frozen Music. Garcetti is currently working on three new photo book projects: one in Cuba, one in West Africa and one in Los Angeles.