Singer-guitarist Dan Zanes knows a lot about traditional music. The folk music enthusiast and former frontman of the '80s pop group the Del Fuegos has spent the last several years making music for children, using a wide variety of musical traditions and folk instruments. But when he got his hands on The American Songbag, a book compiled and published by poet and biographer Carl Sandburg, Zanes was taken by surprise. "I had heard of it. I really didn't know much about Carl Sandburg, but what really struck me was the density of this thing -- huge," he recently told NPR's Melissa Block. 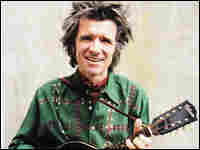 First published in 1927, The American Songbag includes the words and music to 280 songs and ballads that have been sung throughout American history. With music collected from milkmen, oil drillers, ranchers and chuck wagon cooks, the repertoire includes tales from all walks of life. Sandburg called the book "a ragbag of strips, stripes, and streaks of color from nearly all ends of the earth."

Zanes was so impressed by the songbook that he based his new CD on it. Parades and Panoramas: 25 Songs Collected by Carl Sandburg showcases Zanes' favorite songs from The Songbag and pays homage to the poet who spent so much time collecting and preserving the country's musical history.