A Native American stands on the Mall near the Washington Monument, Sept. 21, 2004, during opening ceremonies of the National Museum of the American Indian. Reuters hide caption 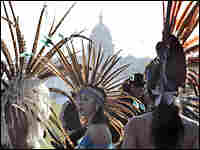 Members of the Aztec Nation gather on the Mall in front of the Capitol building in Washington, Sept. 21, 2004. Reuters hide caption

A blessing from the San Carlos Apache of San Carlos, Ariz., heralded the opening of the National Museum of the American Indian Tuesday morning. For some of the Apache Crown Dancers, adorned in traditional hoods and crowns suggesting the antlers of mountain spirits, this trip to Washington was the first time they had ever left a reservation.

In all, approximately 20,000 Native Americans from all over the hemisphere -- some from as far as the Andes Mountains -- gathered for the opening ceremonies. Fashioned with limestone and suggesting a form shaped over centuries by wind and water, the exterior of the newest Smithsonian museum is the most distinctive of any building or monument on the National Mall. The $200 million facility is dedicated to the history and culture of America's indigenous peoples and houses the world's largest collection of Indian artifacts.