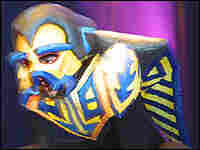 Old-time professional wrestling fans nostalgic for the days when camp was king and characters like Junkyard Dog and Jimmy "Superfly" Snuka ruled the squared circle have a whole new set of heroes to cheer for -- on the Kaiju Big Battel wrestling circuit.

Think of Kaiju Big Battel as the horrific spawn of Japanese monster movies and the WWF ("Kaiju" means "monster" in Japanese). It's a tongue-firmly-in-cheek contest of "athletes" wearing patently silly costumes, looking to give their opponent a solid (and likely pre-ordained) smackdown.

In the mythology of Kaiju, the matches are part of the balance of the universe, where earthly forces of good counter evil creatures invading our planet, bent on world domination. Or something like that...

She was witness to the coming-out party of Kaiju's rising star: Dr. Cube, a "human-genius-turned-quasi-monster" who, with his evil army, continues his quest for world domination.