Accessibility links
From the Kalahari to Malibu A group of Bushmen from the Kalahari Desert in Botswana, touring America to gain support for their legal battle to fight extradition from their ancestral lands, hike the hills and beaches of Malibu.

Listen
From the Kalahari to Malibu

Roy Sesana, a Bushman elder from the Kalahari Desert in Botswana, pauses on a hike in the Santa Monica Mountains of Southern California. Carolyn Jensen, NPR hide caption

Sesana slips off his shoes on the beach at Paradise Cove in Malibu -- a long way from his home in the Kalahari Desert. Carolyn Jensen, NPR hide caption 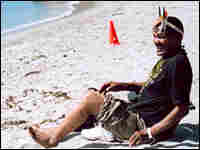 Jumanda Gakelobone, a Kalahari Bushman from Botswana, leaves his shoes above the water line at Malibu's Paradise Cove in Southern California for his first-ever wade in the ocean. He's seen the ocean on television, seen people playing in the water -- but this is the first time he's felt the beach sand between his toes.

Gakelobone and Roy Sesana, a Bushman elder, have traveled thousands of miles to make a pilgrimage of sorts. With Gakelobone as an interpreter, Sesana is seeking help in his people's fight with the government of Botswana to stay on their ancestral lands.

The government of Botswana has declared much of the Kalahari a game reserve, and have evicted Bushman tribes. The Bushmen are fighting back in the courts in Botswana, and will visit the United Nations and Washington, D.C., to solicit money to help with their legal battle.

With NPR's Alex Chadwick, they take a break from their mission to hike the Santa Monica Mountains -- a mostly arid coastal range with winding trails leading down to idyllic beaches.

Sesana's people have lived for thousands of years in an area that is now dubbed the Central Kalahari Game Reserve. In the last several years, most of the people living there have been moved outside the boundaries of the reserve -- voluntarily, the government says.

Botswana's ambassador to the United States, Lapologang Ceasar Lekoa, tells Chadwick that the estimated 2,000 Bushmen remaining in the enormous region had already given up their traditional nomadic ways and were living in settlements, which are not allowed in the reserve. Also, Lekoa says, the Bushmen hunt with guns now and chase game with trucks and dogs. Modern Bushmen would overwhelm the Kalahari's fragile ecology.

But Bushmen dispute those accusations -- they say their culture has survived so long precisely because they are careful hunters, who live in balance with the Kalahari. The U.S. State Department's report on Botswana's human rights practices, released Feb. 24, 2004, states Botswana's government forcibly resettled the Bushmen from their ancestral lands.

Human rights groups say Botswana is more interested in diamond deposits in the Kalahari. The beginning of efforts to remove the Bushmen, about 15 years ago, coincided with diamond explorations in the area, and Botswana has the richest diamond mines in the world.

British journalist Rupert Isaacson is author of The Healing Land, a book about the Kalahari Bushmen, and is traveling with the Bushmen group on their U.S. tour. "They are aware that (diamond mining) is an important part of the Botswana economy," Isaacson says. "They just don't want to be dispossessed, and they want to be part of the decision-making process."

But on this bright Southern California summer day, high above the Pacific Ocean, the Bushmen are back in their element -- conscious of every plant, every sign of wildlife on the trail. Only in this land, the Bushmen aren't hunting for game. They hunt for money.

"This is the dilemma for Bushmen," Chadwick says. "Skilled as they are in desert survival, they must now discover if the earliest human traditions can prevail in modern courts."

Joining the Bushmen from Botswana are two Bushmen from South Africa -- Izak Kruiper, an elder of the Xhomani San, and VetKat Kruiper, an artist -- plus interpreter Belinda Kruiper, Izak Kruiper's wife. VetKat's vision for his people is that healing past injustices will come through art, and he hopes to garner enough funding to create a museum to show that Bushmen have a real culture, art and heritage.

Radio Expeditions is a co-production of NPR and the National Geographic Society.