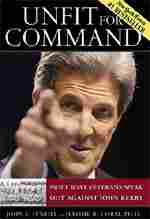 Unfit for Command: Swift Boat Veterans Speak Out Against John Kerry, one of the Regnery Publishing political titles that have climbed the best-seller lists this year. hide caption