Accessibility links
Queen Latifah: From Hip-Hop to Big Band Fifteen years after her hard-hitting hip-hop debut, All Hail the Queen, Queen Latifah has a new CD of jazz, soul and pop standards covering artists as diverse as Dinah Washington and Al Green.

Same Love That Made Me Laugh

Only Available in Archive Formats.
'Mercy, Mercy, Mercy' on 'All Songs Considered'
More at QueenLatifah.com

When seminal rap artist Queen Latifah won acclaim as an actress in movies like Set it Off and Chicago, fans began to get a glimpse of her wide-ranging talents. Now, she's breaking the mold again. Fifteen years after her hard-hitting hip-hop debut, All Hail the Queen, she has a new CD of jazz, soul and pop standards covering artists as diverse as Dinah Washington, Al Green and Billy Strayhorn. 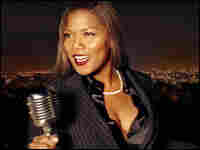 As she tells NPR's Michele Norris, "I've never wanted to be put into a box, not musically."

In a nod to her given name, Queen Latifah has titled the CD The Dana Owens Album. She recorded songs she listened to while growing up. "I loved Dinah Washington, I loved Sarah Vaughan, I liked a big band sound," she says. "I liked to watch Bing Crosby and hear him sing on TV."