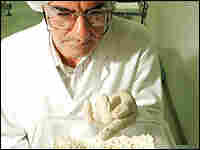 A technician at a Merck manufacturing plant performs a quality check on a batch of Vioxx in May 1999. Reuters hide caption

Pharmaceutical giant Merck & Co. is pulling its arthritis drug Vioxx from the market after a study confirmed earlier concerns that it raises the risk of heart problems, including heart attacks and stroke. Vioxx is currently used by 2 million people worldwide and has been used by more than 84 million people around the world, according to Merck. 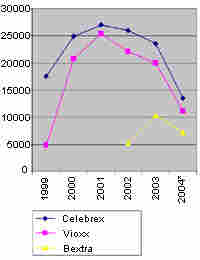 The chart above shows the total number of prescriptions written for Vioxx, Celebrex and Bextra, the three drugs in the class of compounds known as Cox-2 inhibitors. These are mainly used for arthritis and other types of pain. Prescriptions for the largest selling drugs, Celebrex and Vioxx, began to fall off in 2001 after reports of a possible link between Vioxx and heart disease. Studies have so far indicated that only Vioxx poses a risk of heart problems. The Food and Drug Administration will examine the other two drugs to see if there is any cause for concern.

The drug was approved by the FDA in May 1999 for the relief of osteoarthritis and menstrual pain, and later for treatment of the signs and symptoms of rheumatoid arthritis. At that time, studies didn't show any significant risk of heart disease related to Vioxx. But data from a study started by Merck last year showed a doubling in the rate of cardiovascular problems, when compared with placebo. The problems appeared only after patients had been taking Vioxx for 18 months or more.

The FDA advises that patients who are currently taking Vioxx should contact physicians to discuss alternative treatments.

Q: How dangerous is Vioxx?

A: The company that voluntarily withdrew Vioxx from the market, Merck, found that there was an elevated risk of heart problems for people taking a standard dose of Vioxx (25 mg per day). Technically, the risk of heart problems relative to people taking a placebo 1.9, which can be interpreted as a doubling of the risk. But a person's risk of a heart attack or stroke is relatively low. Double the risk is still means the chance of a cardiovascular event is still "small," according to the Food and Drug Administration.

Q: Why haven't we heard about this risk before?

A: There have been a few reports since 2000 suggesting that there may be heart problems associated with Vioxx. Merck and the Food and Drug Administration have been monitoring the situation. Today's surprise announcement comes from a study Merck was doing for a totally different reason. It was looking at 2,600 patients to see if Vioxx prevented such problems as colon polyps. The findings of an increased risk for heart problems were discovered by scientists monitoring safety in the study.

Q: What kinds of heart problems?

A: There was an increase in heart attacks and strokes for people taking 25 mg of Vioxx a day for 18 months or more. The study did NOT find problems in people who had taken Vioxx for a shorter period of time.

Q: What should I do if I'm taking Vioxx?

A: The Food and Drug Admininstration issued a Public Health Advisory to inform patients of Merck's action and to advise patients taking Vioxx to consult with a physician about alternative medications. (See the Web Resources on this page) These alternative medications might include drugs that are similar to Vioxx, like Celebrex or Bextra.

Q: Are Celebrex and Bextra safe?

A: Because Celebrex and Bextra are closely related to Vioxx, the FDA says it will now investigate whether these drugs cause the same problems as Vioxx. There's no evidence that that's the case right now. Other alternatives include older nonsteroidal anti-inflammatory drugs and aspirin. Some of these drugs have been associated with gastrointestinal, liver and kidney problems when used over the long term.

Q: Will the increased risk of heart problems go away when I stop taking Vioxx?

A: The FDA and Merck say that they don't know the answer to that. Merck will continue to follow patients in the study to see if there are any problems after they stop taking Vioxx.

Q: I remember my doctor saying that Vioxx was much better than the other drugs I was taking for arthritis and pain - better than high-dose aspirin or naproxen or ibuprofen.

A: Your doctor was acting on the best evidence at the time. Vioxx was the second member of a class of drugs called Cox-2 inhibitors. (The first was Celebrex; the other is Bextra.) These drugs were considered a major advance in the treatment of osteoarthritis and rheumatoid arthritis because they did not cause stomach or intestinal problems like ulcers and bleeding. In fact, it appeared that the drugs might even protect people from digestive problems. That's why Merck was doing the study that led to today's withdrawal of Vioxx.

Q: How soon should I stop taking Vioxx?

A: Again, the FDA advises that you consult a physician. Merck is asking pharmacies to stop selling all dosages and formulations of Vioxx immediately, including the 12.5 mg and 50 mg doses.

Q: What if I have leftover medications? Vioxx isn't cheap.

Merck will reimburse patients for unused Vioxx. Patients seeking a refund should return any unused Vioxx tablets and oral suspension via regular U.S. mail to the following address:

Patients must include the following information when returning any unused Vioxx tablets and oral suspension:

Merck says that patients will receive a full refund of the price paid as reflected on their pharmacy receipt, plus the cost of shipping via regular U.S. mail.

The studies required by the FDA for approving a drug don't usually run as long as the study Merck was doing on colon polyps. So an effect of a drug that doesn't show up until 18 months after you've started taking it wouldn't have been noticed in the studies the FDA requires for approval.

Today's voluntary withdrawal of Vioxx from the market is an unusual move for a drug company. In many cases, companies wait for an order to recall a drug from the FDA, even after serious side effects are found. And a recall is not always the first response to reports of serious side effects. Though each case is different, the usual scenario is for the FDA and the manufacturer to agree on a warning label listing the risks. That's what happened when the first reports of heart problems were connected to Vioxx. In extreme cases, the FDA has tried to restrict sales of some prescription drugs to certain people. In this case, Merck acted voluntarily after seeing preliminary results of a large study it was doing. It notified the FDA, but there was no intervention by the government.