Accessibility links
DNA Testing May Curb Illegal Ivory Trade Delegates from 160 nations are gathering in Thailand for a meeting on international trade in endangered species. They will discuss new genetic research that makes it easier to trace poached ivory. NPR's John Nielsen reports. 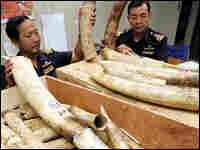 A meeting of the U.N. body responsible for regulating trade in the world's endangered species is getting underway in Bangkok this week. As usual, CITES, formally known as the Convention on International Trade in Endangered Species of Wild Fauna and Flora, will focus on the controversial issue of enforcing the global ban on illegal ivory trade. But this year the debates may have a scientific twist.

Researchers have recently proposed using DNA testing to distinguish between ivory acquired through illegal poaching and ivory from thriving elephant herds in order to target the global black market. DNA fingerprints would be able to reveal the geographic origin of any sample of ivory. NPR's John Nielsen reports.

International Fund for Animal Welfare
What is CITES?