Accessibility links
U.S. Faces Flu Vaccine Shortage The U.S. stock of flu vaccine was cut nearly in half Tuesday as Britain shut down a major vaccine supplier. Facing a record shortage, authorities are urging healthy Americans to defer getting shots so that medication will be available for those most at risk. Hear NPR's Melissa Block and Dr. Jerry Avorn of the Harvard Medical School. 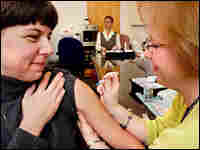 Americans' supply of flu vaccine was cut nearly in half Tuesday as Britain shut down the world's second-leading supplier. The Chiron Corp. had intended to ship 48 million doses of vaccine to the United States, but regulators suspended the company's license, citing problems at its Liverpool, England, manufacturing plant.

Authorities are urging healthy Americans to defer getting shots so that medication will be available for the elderly, infants and others at high risk.

A: U.S. and state health officials are asking people to refrain from getting flu shots unless they are in a high risk category. Annually, 36,000 people die from complications related to the flu – complications like pneumonia and other serious diseases. Officials are trying to preserve the remaining 54 million doses for people who might be at risk for coming down with a complication of the flu.

A: Not exactly. The CDC has worked out a system with Pennsylvania manufacturer Aventis Pasteur to redirect tens of millions of flu vaccine doses that haven't been shipped out yet. There were 22 million unshipped doses at the time of the British shutdown. CDC director Julie Gerberding says that approximately 14 million of these doses will be targeted to areas where supplies might run out before high-risk people get vaccinated. Another 8 million will be held in reserve and distributed once the flu season begins. That way, she says, CDC can locate flu "hotspots" and make sure people in these areas get covered.

Q: Does the government have the power to do this?

A: The arrangement with Aventis Pasteur is voluntary. The federal government has control only over vaccine contracts it has for hospitals like the Veterans' Affairs medical system. State governments control only what they distribute through state health departments. Laws vary from state to state about how much power the government has over privately owned medical supplies, such as vaccines.

Q: I take care of my elderly mother, who's in good health. Should I try to get her a flu shot or not?

A: Yes. According to the Centers for Disease Control and Prevention, people who should get a flu shot this year include:

· all women who will be pregnant during influenza season,

· children 6 months to 18 years of age on chronic aspirin therapy,

Q: I've heard there's a new kind of vaccine that's given by a nasal spray instead of by a shot. Can I get one of those?

A: Again, officials are asking people who are not at high risk of complications from the flu to refrain from getting any kind of vaccine. They are, however, recommending that certain people in these high-risk groups get the nasal-spray vaccine instead of the shot. The product goes by the brand name FluMist. People who should get the spray are healthy persons aged 5 to 49 years and who are not pregnant. This includes health-care workers except for those who care for severely patients in special care units who have severely compromised immune systems. The CDC is also advising FluMist for people who care for children aged less than 6 months of age.

Q: How does the flu vaccine work?

A: The flu vaccine contains three strains of influenza A and B virus. The strains are selected in the spring, based on the best guess of scientists as to which strains will cause problems in the following fall and winter. The shot contains inactivated pieces of the virus. The nasal spray contains live, but weakened, segments of the virus. After immunization, the body’s immune system produces antibodies to fight the infection.

Q: So I'm not in one of the high-risk groups. Is there anything I can do?

A: The best way to avoid getting the flu is to wash your hands thoroughly several times each day. If you get sick, there are drugs that may help shorten the illness or make it less severe – and some that might prevent the flu (see below).

Q: Should I take an antibiotic?

A: No. The flu is caused by a virus and antibiotics only work against bacteria. The only drug effective against the flu is called an antiviral. There are four antivirals available, each of which has a variable effect against flu. The newest is oseltamivir, a prescription-only drug that is sold under the brand name Tamiflu. It costs $68 for a ten-day supply. The other drugs are zanamivir (Relenza), amantadine (Symmetrel), and rimantadine (Flumandine). The latter two are cheaper generic drugs. Not all are approved for use in children.

Three of the antiviral drugs have been approved by the Food and Drug Administration for prevention of the flu. These are amantadine, rimantadine and oseltamivir. The CDC cautions that these drugs are not, however, a substitute for influenza vaccination. All of these drugs are prescription drugs, and a doctor should be consulted before the drugs are used for preventing the flu.

A: According to the CDC, many children who are younger than 9 years old need two doses if they haven’t had a flu shot before. That's to insure that their immune systems are boosted enough to fight off the flu. But if you can only get one shot because of the shortage, officials say that’s better than none at all.

Q: I'm one of the people who should get a shot. Is there any risk?

A: The CDC says that people who have a severe allergy to hens' eggs should not get the shot. That’s because the flu virus is grown in hen's eggs during production and then purified into the liquid that goes into the shot. Health officials also say that it's "prudent" to avoid vaccination if you’ve previously had It is prudent to avoid vaccination in people who previously developed Guillain-Barré syndrome (GBS) in the 6 weeks following a flu shot

The flu is an illness affecting the respiratory system, including the lungs, sinus and nasal passages. It can be mild to severe. Fever is always present and children often have nausea, vomiting and diarrhea. People at high-risk may develop pneumonia or their previous medical conditions may get worse – they may develop congestive heart failure, asthma or diabetes. Children are at risk for sinus problems and ear infections.

Avoiding the Flu and Colds

The CDC says if you can’t get vaccinated for the flu, handwashing and good respiratory hygiene are good ways to avoid the flu and colds.

· First wet your hands and apply liquid or clean bar soap. Place the bar soap on a rack and allow it to drain.

· Next rub your hands vigorously together and scrub all surfaces.

· Continue for 10 - 15 seconds or about the length of a little tune. It is the soap combined with the scrubbing action that helps dislodge and remove germs.

· Rinse well and dry your hands.

· Cover your mouth when you sneeze or cough

· Keep fingers out of your mouth, nose and eyes