Accessibility links
Interviews: Lake Titicaca's Lost Civilizations UCLA anthropology professor Charles "Chip" Stanish and his colleagues are piecing together evidence of an ancient, sophisticated culture on the shores of Lake Titicaca, high in the Peruvian Andes. 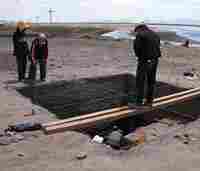 Stanish leads an excavation of a site near a riverbank, high in the Andes. Cotsen Institute of Archaeology hide caption 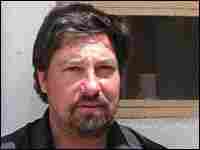 UCLA anthropology professor Charles "Chip" Stanish, director of the Cotsen Institute of Archaeology, has been searching the shores of Lake Titicaca for evidence of civilizations at least 7,000 years old.

The lake is shared by both Bolivia and Peru, and is the highest-altitude lake in the world, a basin of pristine water cradled by the Andes. Stanish tells NPR's Alex Chadwick he's dedicated his career to finding evidence of trade between ancient residents of the lake's shores and other cultures in the Amazon basin -- "sparks of civilization," he calls them.

"We think that inter-regional trade is one of the key factors in the development of civilization, as we know it," Stanish says. "We decided to look for these complex societies, these ancient civilizations... These would be empires, and big ancient states that controlled these territories in the first millennium AD, and we wanted to see if, in fact, we could find trade routes."

Stanish says he and his colleagues did indeed find evidence of an extensive web of trade -- strings of settlements at regular intervals on the route from the lake to the jungle far below. And the more he searches, the more he finds the ancient cultures of the lake to be more complex than previously believed -- highly advanced architecture, sophisticated trade and even canal systems that reversed the flow of rivers.

"There is so much," Stanish says. "We've barely touched the surface. We've made great strides in pointing out how very early cultures developed... earlier than we ever anticipated -- several hundred years earlier -- and we’ve also shown they were much more complex much earlier on.

"We've also, I think, made a great contribution in helping the people in the Titicaca region, indigenous Peruvians and Bolivians who live here," he says. "They've always recognized this intuitively, but now we've given the scientific imprimatur that they have these great fantastic civilizations in the past. And this has been a source of pride for people in the basin -- that is very positive, too."

NPR-National Geographic Radio Expeditions Interviews, a monthly series of interviews by NPR'S Alex Chadwick, features renowned explorers and field scientists from around the world, heard on NPR's Day to Day.