Accessibility links
California Blasted for Poor Prison Health Care California spends $1 billion each year to provide medical services for inmates, but the quality of that care is under fire. Amid charges of incompetence, doctors face the challenge of treating patients who often ignore their health until illness is all but untreatable. 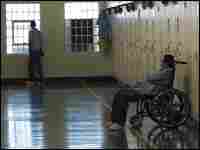 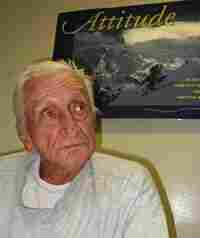 Clyde Hoffman is spending the remainder of his life sentence in hospice care for emphysema and lung cancer. "Everybody that works up here is excellent -- this is far beyond my hopes and dreams that there'd be a place like this in prison." Mandalit del Barco, NPR hide caption

California spends $1 billion each year to provide medical services for inmates of the state's 32 prisons. But the quality of that care is being scrutinized. NPR's Mandalit del Barco reports on accusations of medical incompetence, lax staffing and outdated equipment, and the challenge of treating patients who often ignore their health until their illness is all but untreatable.

Broderick Crawford, an inmate serving time for attempted murder at Corcoran State Prison, is typical of many prisoners who simply don't trust the quality of care behind bars. He's got a cracked tooth, but he's afraid to let the prison dentist fix it. He's willing to wait until his sentence is served -- two years and counting -- and get it fixed on the outside.

Many California prison doctors and medical staff have been hit with charges of incompetence and medical neglect. A recent case involving an inmate who died after having his wisdom tooth pulled has generated more negative headlines. There's also an ongoing class-action lawsuit against the California Department of Corrections( CDC).

"To put it very bluntly, the healthcare system at CDC is sick," says state Sen. Jackie Speier (D-San Mateo/San Francisco). "Twenty percent of the physicians that work at CDC have either a bad mark on their record or a series of malpractice lawsuits -- a figure that is four to five times higher than the general population of physicians in California."

But some prison doctors bristle at charges of incompetence. "We are as good as anybody out there doing medicine," says 73-year-old Dr. Juan Tur, who practices medicine at Chowchilla, the nation's largest women's prison. "I believe we're more scrutinized, to check our license completely."

Other prison doctors complain of outdated equipment and inadequate staffing. And the patients themselves can be a huge challenge to treat.

"They're first diagnosed with HIV when their immune systems are shot. And now they have a moment of clarity, where they can focus on their medical care, and they want it all done now," Bick says.