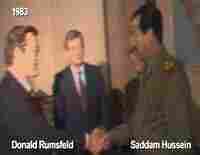 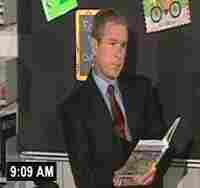 In a key scene from Fahrenheit 9/11, President Bush continues reading My Pet Goat with elementary school students on the morning of Sept. 11, 2001 after being told the nation was under attack. Columbia Tristar hide caption 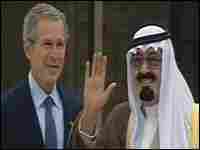 Having earned more than $120 million at the box office a full month before the election it was designed to affect, Michael Moore’s Fahrenheit 9/11 has now arrived on DVD with 85 minutes of additional material -- virtually every frame of which is calculated to make home viewing at "Get Out The Anti-Bush Vote Parties" a freshly scabrous experience.

The sensation Moore's film created has, of course, inspired the release of a tidal wave of political documentaries -- mostly from the left, but some from the right -- all aiming to have an impact on the 2004 election.

None of the others, though, have been remotely as effective as Fahrenheit 9/11. Moore is nothing if not an agitator and publicity machine, and this film finds him wholly in his element. 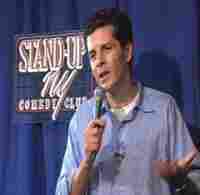 You probably already know where you stand on Moore's methods and politics, so suffice it to say that Fahrenheit 9/11 doesn't suffer particularly from a reduction in size to the small screen. Much of its footage was videotape to begin with, and the film actually looks sharper and clearer on TV than it did on theater screens.

Moore's arguments and opinions -- whether he's tying the Bush family to the Bin Laden clan, or depicting a president who is by his lights ineffective, disengaged and in the pocket of corporate interests -- all remain as persuasive as they were before. And the emotional material --including graphic footage from Iraq that mostly hasn't been shown on network or cable news, and a haunting series of interviews with Lila Lipscomb, an anguished mother from Moore's hometown who lost her son in the Iraq war -- is, if anything, more effective on the small screen than it was in theaters.

» A mini-documentary about the opening of the film, featuring footage of audience reaction, testimonials (especially from African-American viewers), commentary from Quentin Tarantino on why the film won the Palme D’or at Cannes, and pleas to get out and vote in November.

» A Swedish journalist's eyewitness account of a U.S. Army raid in Samarra, Iraq. He narrates footage of the event, emphasizing all that's grotesque and insensitive about the soldiers' deliberate humiliation of hooded, bound Iraqis.

» Additional scenes not used in the film, including footage of a peaceful Baghdad before the war, of Miami retirees patrolling Florida's waters as they speak of how they plan to keep terrorists at bay, of Arab comedians (some quite funny) in New York City, and also of events that have either come to light since the release of the film or that have happened in the months since.