When the New York City subway was first built 100 years ago, it was informed by a philosophical movement known as "The City Beautiful." It held that art and architecture must appeal to many -- not just the elite -- and that beautiful structures could inspire civic virtue. Since 1985, a Metropolitan Transportation Authority program known as Arts for Transit has revived that notion, spreading beautiful mosaics, sculptures and other hidden treasures underground. NPR's Margot Adler reports. 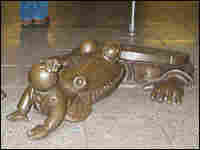 At New York's 14th Street subway station, a bronze alligator emerges from a manhole to swallow up a hapless passerby. It's one of many such whimsical figures created for the station by artist Tom Otterness. Jeff Rogers, NPR hide caption