Accessibility links
Hidden Treasures: Gifts Fit for a President Every American president receives gifts from fans and foreign dignitaries, but as Harriet Baskas reports for Hidden Treasures, an occasional series on All Things Considered, some of the most precious and peculiar ones never get displayed. 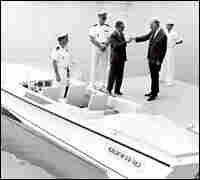 Every president gets gifts from fans and foreign dignitaries, but as Harriet Baskas reports for Hidden Treasures, an occasional series on All Things Considered, some of the most precious and peculiar ones never get displayed -- even at presidential libraries. 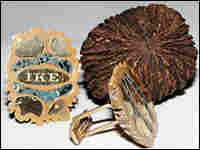 Before laws were enacted to ban the practice, presidents were allowed to keep any gift they received. They disposed of them in a haphazard manner. For instance, President Dwight D. Eisenhower took the presents he wanted and left the rest in the White House basement for scavenging staff members.

Today, the Eisenhower Library in Abilene, Kan., displays some of Ike's favorites, such as a Grandma Moses painting and collection of Steuben glass. A storage room is full of dolls made of horsehair, paint-by-numbers landscapes, and a pair of "Ike" cufflinks carved out of a walnut.

Recordings from President Richard Nixon's secret White House tapes reveal that he and Chief of Staff H.R. Haldeman worked hard on a tricky exchange with Soviet Premier Brezhnev, gaining a Soviet hydrofoil in exchange for an American-made Cadillac.

President Harry Truman had his own share of lighthearted gifts, but 20 years after his death, Truman museum staff members discovered a somber reminder of past events. Tucked in a drawer was a Purple Heart with a note sent by a grieving father. "As you have been directly responsible for the loss of our son’s life in Korea," the note reads, "you might just as well keep this emblem on display in your trophy room as a memory of one of your historic deeds. Our major regret is that your daughter was not there to receive the same treatment as our son received in Korea."

The award -- and the note -- are now on display at the Harry S. Truman Presidential Library and Museum in Independence, Mo.

This story is part of the Hidden Treasures Radio Project, funded by the Corporation for Public Broadcasting, the National Endowment for the Arts and the Cultural Development Authority of King County, Wash.

The Nixon library is located in Yorba Linda, Calif., not Loma Linda, as was stated in the audio.