Accessibility links
Joyce Carol Oates: Love and Loss in 'The Falls' Joyce Carol Oates returns with The Falls, a haunting tale of tragedy and redemption. Set in Niagara, the waterfalls exert a deathly pull on two generations of a family. NPR's Lynn Neary speaks with the author.

Listen
Joyce Carol Oates: Love and Loss in 'The Falls' 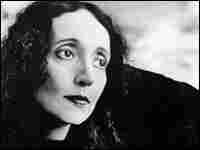 For 40 years, Joyce Carol Oates has churned out novels, stories and plays at such a rapid rate that it's difficult to imagine if there is ever a moment when she is not writing. But Oates says the secret to her gift is really pretty simple: hard work. The writer grew up on a farm in upstate New York -- "a world where people are never idle," Oates tells NPR's Lynn Neary. "If my mother had five minutes between one chore and another, then she would be sewing or knitting."

Oates' latest novel, The Falls, is set in the city of Niagara Falls, not far from her childhood farm. The story opens with the suicide of a young newlywed on his honeymoon, and throughout the book, the waterfalls exert a deathly pull.

The hurt. The humiliation. The unspeakable shame. Not grief, not yet. The shock was too immediate for grief. When she discovered the enigmatic note her husband had left for her propped against a mirror in the bedroom of their honeymoon suite at the Rainbow Grand Hotel, Niagara Falls, New York, Ariah had been married twenty-one hours. When, in the early afternoon of that day, she learned from Niagara Falls police that a man resembling her husband, Gilbert Erskine, had thrown himself into the Horseshoe Falls early that morning and had been swept away -- "vanished, so far without a trace" -- beyond the Devil's Hole Rapids, as the scenic attraction downriver from The Falls was named, she'd been married not quite twenty-eight hours.

These were the stark, cruel facts.

"I'm a bride who has become a widow in less than a day."

Ariah spoke aloud, in a voice of wonder. She was the daughter of a much-revered Presbyterian minister, surely that should have counted for something with God, as it did with secular authorities?

Ariah struck suddenly at her face with both fists. She wanted to pummel, blacken her eyes that had seen too much.

Yes. I would. Foolish woman of course I would. Who are you, to be spared My justice?

How swift the reply came! A taunt that echoed so distinctly in Ariah's skull, she halfway believed these pitying strangers could hear it.

But here was solace: until Gilbert Erskine's body was found in the river and identified, his death was theoretical and not official. Ariah wasn't yet a widow, but still a bride.

... Waking that morning to the rude and incontrovertible fact that she who'd slept alone all her life was yet alone again on the morning following her wedding day. Waking alone though she was no longer Miss Ariah Juliet Littrell but Mrs. Gilbert Erskine. Though no longer the spinster daughter of Reverend and Mrs. Thaddeus Littrell of Troy, New York, piano and voice instructor at the Troy Academy of Music, but the bride of Reverend Gilbert Erskine, recently named minister of the First Presbyterian Church of Palymra, New York.

Waking alone and in that instant she knew. Yet she could not believe, her pride was too great. Not allowing herself to think I am alone. Am I?

A clamor of wedding bells had followed her here. Hundreds of miles. Her head was ringed in pain as if in a vise. Her bowels were sick as if the very intestines were corroded and rotting. In this unfamiliar bed smelling of damp linen, damp flesh and desperation. Where, where was she, what was the name of the hotel he'd brought her to, a paradise for honeymooners, and Niagara Falls was the Honeymoon Capital of the World, a pulse in her head beat so violently she couldn't think. Having been married so briefly she knew little of husbands yet it seemed to her plausible (Ariah was telling herself this as a frightened child might tell herself a story to ward off harm) that Gilbert had only just slipped quietly from the bed and was in the bathroom. She lay very still listening for sounds of faucets, a bath running, a toilet flushing, hoping to hear even as her sensitive nerves resisted hearing. The awkwardness, embarrassment, shame of such intimacy was new to her, like the intimacy of marriage. The "marital bed." Nowhere to hide. His pungent Vitalis hair-oil, and her coyly sweet Lily of the Valley cologne in collision. Just Ariah and Gilbert whom no one called Gil alone together breathless and smiling hard and determined to be cheerful, pleasant, polite with each other as they'd always been before the wedding had joined them in holy matrimony except Ariah had to know something was wrong, she'd been jolted from her hot stuporous sleep to this knowledge.

God damn! She was a new, shy bride. So the world perceived her and the world was not mistaken. At the hotel registration desk she'd signed, for the first time, Mrs. Ariah Erskine, and her cheeks had flamed. A virgin, twenty-nine years old. Inexperienced with men as with another species of being. As she lay wracked with pain she didn't dare even to reach out in the enormous bed for fear of touching him.

She wouldn't have wanted him to misinterpret her touch.

Almost, she had to recall his name. "Gilbert." No one called him "Gil." None of the Erskine relatives she'd met. Possibly friends of his at the seminary in Albany had called him "Gil" but that was a side of him Ariah hadn't yet seen, and couldn't presume to know. It was like discussing religious faith with him: he'd been ordained a Presbyterian minister at a very young age and so faith was his professional domain and not hers. To call such a man by the folksy diminutive "Gil" would be too familiar a gesture for Ariah, his fiancée who'd only just become his wife.

In his stiff shy way he'd called her "Ariah, dear." She called him "Gilbert" but had been planning how in a tender moment, as in a romantic Hollywood film, she would begin to call him "darling" -- maybe even "Gil, darling."

Unless all that was changed. That possibility.

She'd had a glass of champagne at the wedding reception, and another glass -- or two -- of champagne in the hotel room the night before, nothing more and yet she'd never felt so drugged, so ravaged. Her eyelashes were stuck together as if with glue, her mouth tasted of acid. She couldn't bear the thought: she'd been sleeping like this, comatose, mouth open and gaping like a fish's.

Had she been snoring? Had Gilbert heard?

She tried to hear him in the bathroom. Antiquated plumbing shrieked and rumbled, but not close by ...

Excerpted from The Falls. Used by permission of HarperCollins.

Oates on the Transformation of Books to the Big Screen Dec. 24, 2001
Oates Discusses Her Collection of Stories 'Faithless' June 24, 2001 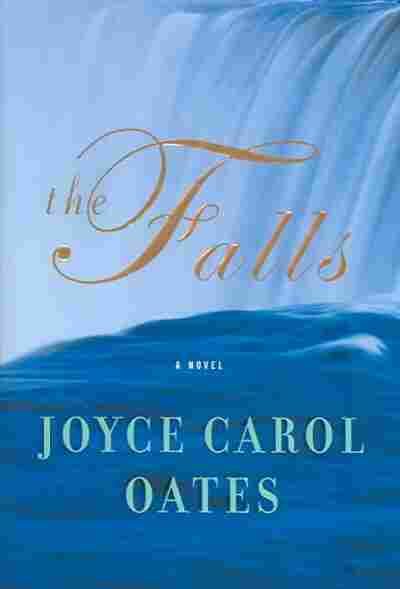 by Joyce Carol Oates and Halpern