Accessibility links
A Drug Smuggler's Paradise Corruption and vast stretches of jungle and shoreline have made Central America a drug-smuggler's paradise. NPR's John Burnett has the first of three reports.

U.S. officials estimate up to three-quarters of the cocaine that enters through the country's southern border passes through Central America, by land or sea.

In the first of a three-part series, NPR's John Burnett reports that the countries once known as banana republics are fast becoming "cocaine republics." 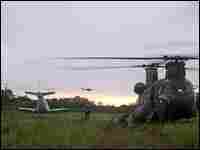 A U.S. Army CH-47 Chinook helicopter sits on clandestine landing strip in Guatemala's Petén region, the site of a crash-landing by a cocaine-hauling plane from Colombia. U.S. Embassy-Guatemala hide caption