Accessibility links
Playing a 'Genius': Jamie Foxx Takes on Ray Charles When Ray Charles died in June of this year, Hollywood was already at work on his film biography. NPR's Michele Norris talks with actor and comedian Jamie Foxx, who portrays the musical legend in Ray. 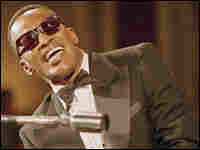 When film director Taylor Hackford decided to bring the Ray Charles story to the big screen, he knew the project had great potential -- and great risk. A film biography would only work if he could find just the right actor to portray the musical legend.

At first, Jamie Foxx may not have seemed like a natural choice for the leading role. He made his name as a comedian, and in film, usually played tough guy roles. But in an interview with NPR's Michele Norris, Foxx reveals that there's more to his resume. A trained classical pianist and gifted singer, Foxx convinced the filmmakers that he could embody Charles on screen in the way he moved, spoke and sang.