Accessibility links
Female Farmers: A Growing Trend in America The number of farms managed by women in the U.S. has grown markedly in recent years. NPR's Jennifer Ludden talks with women who have forged their way into a traditionally male-dominated industry. 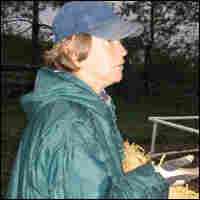 Lyn Garling runs an organic farm, where, each year, she tries to make one significant improvement. This year, she put up a 40x64 hoop structure for hay storage in the winter. Davar Ardalan, NPR hide caption 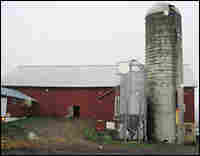 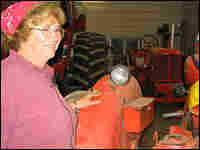 Scholars comment on the growth of women in agriculture:

Lisa Holden, an associate professor of dairy and animal science at Penn State

When Berneta Gable's brother wanted out of the family farm, she couldn't pass up the challenge of taking it over. Snider Homestead had been in the family since her great-great-grandfather homesteaded the land in 1892. Gable loved farming, but when she reached adulthood in the 1970s, it was not something a woman could realistically aspire to do. Today, she manages a full dairy operation of 300 cattle.

Gable is part of a growing trend in the United States, where the number of farms managed by women climbed 13 percent between 1997 and 2002. Women now run one in every ten American farms, challenging a tradition-bound, male-dominated industry.

Lyn Garling, an outreach educator in pesticide reduction at Penn State, is a part-time farmer. She runs Over the Moon, an organic farm specializing in chickens, turkeys, eggs, beef and pork.

"You are dealing with a whole structure that is male-dominated, and there are different elements in that infrastructure: farmers, supply dealers, feed stores," Garling tells NPR's Jennifer Ludden. "Some of the good ol' boy system -- that's hard to take."

But change may be coming. In recent years, Pennsylvania lost 2,000 farms, yet gained 1,000 managed by women. And in October, the state hosted a dairy conference specifically for women. Patty McMurray, a dairy farmer who attended the conference, says it's about time women were recognized for their role in the industry: "I think women in production agriculture are actually more suited to that than men -- because of our maternal nature."