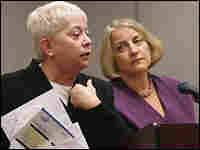 Summit County resident Catherine Herold (left), whose voter registration was challenged by the Ohio Republican Party, fights the claim at the Board of Elections with the help of law professor Margery B. Koosed. Lew Stamp/Akron Beacon Journal hide caption 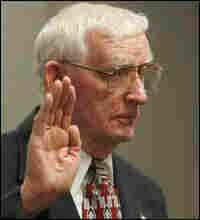 Republican Louis Wray, one of four local residents who challenged voter registrations in Summit County, is sworn in at the board of elections meeting. Lew Stamp/Akron Beacon Journal hide caption

Republican efforts to challenge thousands of voter registrations in Ohio were stopped by a federal judge this week, and on Friday, a federal appeals court let that ruling stand. State GOP officials had challenged thousands of registrations as fraudulent, basing their suspicions about some on the fact that party mailings sent to voters were returned to sender. In a contentious hearing in Akron on Thursday, Summit County election officials dismissed all 976 challenges brought forth by the state Republican Party. NPR's Pam Fessler reports.

Excerpts from the Summit County Board of Elections meeting:

MS. TRIPLETT: My name is Patricia Triplett. I have lived in my precinct for 35 years. A block away I've lived for 20 years, I've lived 15 years. You don't know me, and you brought me up here. We have boys and girls over in another country fighting for someone else's right to vote, and you challenge my right to vote in this country. How sad this is. How sad this is that you're allowed to do that to us. It's just unbelievable and it scares me.

Mr. Lou Wray, you challenged my husband, and we live in the same neighborhood. Okay? But you've never met us a day in our lives, hard-working individuals. My husband is a full-time student at Kent State University, where I also possess a bachelor's degree and a master's degree. We work hard just like you do, trying to make our livings, trying to prove ourselves in this world to get to the point where we're 80 years old, like you.

But you signed your name to 200 documents of people you have never, ever met a day in your life, challenging our right to vote. And you don't even know whether we live… in Tallmadge, Ohio. You have no idea. Somebody just called you on the phone and asked you to do a favor and you said okay.

And now you look foolish standing up here saying, "I don't know. They just called me on the phone. I don't have anything." You look silly. And we have to be inconvenienced and we have to come to work.

MS. KOOSED: Ms. Miller, you filed a challenge to the voting residence of Catherine Ann Herold, who lives at… Barberton, Summit County, Ohio; is that correct?

MR. PRY: And have you ever been to that residence?

MR. PRY: You have indicated in this challenge form that the person – that you believe that she does not live at that residence; is that correct?

MR. PRY: And what is the basis for you making this challenge?

MS. MILLER: That was my impression that these items that I signed were for people whose mail had been undeliverable for several times, and that they did not live at the residence.

MR. PRY: Did you personally send any mail to Ms. Herold?

MR. PRY: Have you seen any mail that was returned to Ms. Herold?

MR. PRY: Do you have any personal knowledge as we stand here today that Ms. Herrold does not live at the address…

MS. MILLER: Only that which was my impression, that their mail had not been able to be delivered.

MR. PRY: And who gave you that impression?

MR. PRY: An officer of which party?

MS. HEROLD: I refused mail that was sent to me from the Republican headquarters in Akron. That's the only thing I ever got.

MR. HUTCHINSON: That may be why you were challenged.

MS. HEROLD: But I did not –- it was not undeliverable, it was refused.

MR. HUTCHINSON: I mean, ma'am, I don't know why you were challenged.

Audio from the meeting was provided by WAKR in Akron, Ohio